FOUR WEEKS IN LESBOS:
SOMETIMES, CAREGIVING IS A CUP OF HOT TEA

At first, I felt a bit embarrassed: I was only going to be here for a couple of weeks. Was it realistic to think that I could be of help?

In March 2021, I was given the opportunity to work in Lesbos, Greece for a month. I worked as a doctor with Boat Refugee Foundation, a Dutch non-governmental organisation, who deliver emergency medical aid to the largest refugee camp on the island. Their mission to ‘make a difference in places where it is needed most’ is very close to the answer I give when people ask me why I became a paediatrician: to care for those that are less able to care for themselves.

As a paediatrician, I have always noticed that the patients/caregivers who affect me the most are the people in whom I recognize a part of myself. I remember telling a mum that just gave birth to her fourth daughter that I am one of four daughters. I remember the intelligent, quiet girl who was too proud to show her fear about her upcoming colonoscopy; she became more relaxed when I told her I once had a colonoscopy myself. I vividly recall how happy I was when we were able to treat the fungal skin infection of a funny but stubborn young girl from Somalia who wanted to become a doctor.

Maybe that’s why the work in Lesbos affected me as much as it did. “They” are

“us”. Ambitious, intelligent and educated young people that had the courage to leave a country in which they did not have a future. Often it was not just the situation in the country that made them leave, it was a recent tragedy on top of that, such as the death of a family member. This convinced them that fleeing was their only choice to preserve their own lives and the lives of their loved ones. They arrived in Europe, surviving the pushbacks, only to find themselves in a refugee camp for years, desperate and depressed as they wait for asylum. 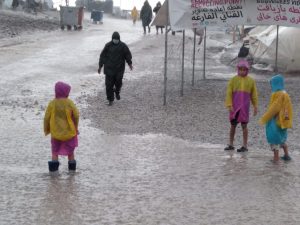 At first, I felt a bit embarrassed: I was only going to be here for a couple of weeks. Was it realistic to think that I could be of help? Or would I be a mere observer without contributing much? The remarkable resilience of people deprived of everything they once valued made me feel very humble. This was not about me. It was about showing people that we do care; a cup of hot tea on a cold night, the power of silence to show that it’s OK to open up, and the reassuring promise that we could reassess a child if the diarrhea would not stop.

Europe does not only create physical borders around the camps, we also create borders in our hearts and minds, when we think about solutions for “the refugee crisis” or “the migrant problem”. While it’s easier to distance yourself when talking about “them”, the stories of their childhood, their relationship issues, the self-doubt and the ambition to develop themselves all sound very familiar. In reality, maybe the only difference between “them” and “us” is that we are lucky enough to be born somewhere else.

This website uses cookies to improve your experience while you navigate through the website. Out of these, the cookies that are categorized as necessary are stored on your browser as they are essential for the working of basic functionalities of the website. We also use third-party cookies that help us analyze and understand how you use this website. These cookies will be stored in your browser only with your consent. You also have the option to opt-out of these cookies. But opting out of some of these cookies may affect your browsing experience.
Essential Cookies Always Enabled
These Cookies are necessary for the Services to function properly and cannot be disabled. They are usually only set, in response to actions made by you, enabling functions like navigation, or setting preferences. These Cookies do not store information about you that will be used for other purposes.
Preferences & Functional Cookies
These Cookies enable the Services to provide enhanced functionality and personalization. They may be set by us (first-party Cookies) or by third-party providers who work with us (third-party Cookies).
Performance & Analytics Cookies
These Cookies are for internal use only. They help us to secure and maintain our Services, and to remember your preferences for tools found on the Services. They are also used for gathering analytics data on how you interact with our Services and the improvement performance of the site accordingly. If you do not allow these Cookies, we will not know when you have visited our site.
Targeting & Advertising Cookies
These Cookies make advertisement more relevant to you. Our advertising partners may use it to show you relevant ads on different websites by uniquely identifying your browser and internet device.
SAVE & ACCEPT
Register Now Book Hotel Subscribe